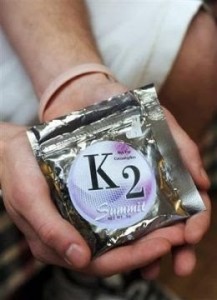 A new drug is emerging, that has recently been coined “fake pot” and is growing in popularity among teenagers. It is generally sold as incense or potpourri and is currently legal in the United States. It is made up of herbal and spice plant products, but is sprayed with a psychotropic drug and produces similar results to the chemical THC in marijuana.

K2 is usually smoked and the active ingredient is about 10 times greater than in THC. This means that you can smoke a lot less to get just as high, which is part of the appeal to young people.

Many people think that marijuana use is harmless, but people are finding out that, although similar, K2 has many more dangerous effects. Research has shown that use can cause hallucinations and delusions, as well as increased agitation, elevated blood pressure, and an increase in heart rate. These responses are not typical of marijuana use and seem to imply that the use of K2 is more serious.

Additionally, K2 can not be identified in drug tests and it’s becoming a cause of concern for employers. Different states are beginning to question its legality as well and some have even banned usage altogether. Research is lacking on the long term effects of using K2 because it has only recently been brought to the public’s attention. However, the disclaimer reads “not for human consumption” and it is predicted that long term use of K2 will prove to be very dangerous, and maybe even fatal.